On 21 February, Russia asserted its view on the independence of the Donetsk People’s Republic  and the Luhansk People’s Republic and began mobilising troops to conduct peacekeeping  operations in these areas. This was a violation of Ukraine’s sovereignty and independence, the  Minsk agreement, and has been widely denounced by the West. Subsequently, Russia has  instigated military strikes on Ukraine and has invaded.

The build-up of Russian forces on the Ukrainian border in recent weeks has been a clear indication of intent to take  action in Ukraine. In response the U.S. and NATO Member nations had for some time been providing Ukraine with  military aid, including lethal weapons, anti-armour missiles, anti-armour artillery, heavy machine guns, helicopters,  small arms, ammunition, radio systems, medical equipment and spare parts. Monetary aid has also been provided.

The U.S. Administration has pledged aid to Ukraine of some $650 million to date. The U.K, Danish and Dutch  Governments have also provided material monetary support.

None of this deterred Russia from taking action and invading Ukraine with missile strikes and border crossings.  Russia has seized key strategic assets such as the Chernobyl Nuclear plant and have attacked both military and  civilian sites.

Post the initial move on Ukraine by Russia, sanctions were imposed. Post the missile strikes, further sanctions  have now been imposed by the U.S. and other countries. Further sanctions and action may be taken as events  unfold.

The U.S. has sanctioned Russia’s foreign debt, meaning it can no longer raise money from Western financial  institutions. This will impact Russia’s ability to finance its military efforts. Further sanctions by the West are likely as Russia deepens its invasion of Ukraine. All 27 EU Member states have agreed on a range of anti-Russia  measures. Russian banks have had their assets frozen in the U.K. and certain wealthy Russian billionaires have  been issued travel bans and their ability to access funds from EU banks has been denied. Further to this, trade  between EU and the two rebel-held regions has been banned.

Germany has halted major infrastructure projects with Russia, including those involving the Nord Stream 2 gas  pipeline, refusing to allow it to open. In addition to this, some 351 members of Russia’s Duma, or parliamentary  lower house have been hit with restrictions. Further restrictions that may be imposed include excluding Russia from  the global financial messaging service known as Swift, used by most banks worldwide. That would seriously curtail  Russia’s ability to do business.

At some point, further sanctions would start to harm the economies of those imposing them, as countries such as  the U.S. and Germany have strong ties with Russia via trade.

The economic damage to Ukraine, the second largest country in Europe and a huge source of agriculture, could have  worldwide implications. Russia has already inflicted economic damage on Ukraine, with contracts being cancelled  and businesses withdrawing people. The White House has warned the US silicon chip industry to prepare for a ban  of exports to Russia. This may well soon extend to all electronics supplies.

Crude Oil WTI has risen about $3 USD/Bbl today or about 3.33%, continuing recent increases. 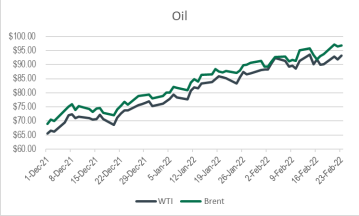 Any prolonged conflict is almost certain to put further upward pressure on oil and natural gas prices. Sanctions will  continue to limit supplies and force prices even higher, particularly in Europe, which is already struggling with high  energy prices and limited supply. This may mean sustained or even higher inflation, which could mean further  upward pressure on interest rates.

Gold is usually seen as a safe haven in times of conflict. The main Ukraine exports are the raw materials iron,  steel, mining products and agricultural products, along with chemical products and machinery. Given Ukraine is a  large exporter of grains and cereals, there is the potential for some significant price rises, with the U.S. being a  large purchaser.

The Russian move into Ukraine will cause further increases in equity market volatility. We will also continue to feel  the impact in terms of rising energy prices. As can be seen from the graphic below, Russia and Ukraine account for  a material amount of Oil and gas products at around 22% of global exports combined.

Russian gas exports to Europe account for 40-50% of its import requirements. Energy markets have been tight as  COVID related lockdowns have abated and travel gradually resumes. We overlay this with increasing concerns  around ESG and banks in western economies under pressure to cease funding for fossil fuel projects, which has  further underpinned already tight supply demand dynamics. We suspect there is already a premium in energy prices  for current tensions, with more upside in prices likely should full scale war break out. This feeds directly into  inflationary concerns which are already a dominant theme in equity markets with most companies in the current  reporting season citing rising cost pressures in terms of both materials and labour.

Soft commodities such as Wheat and Corn would likely be impacted given Russia and Ukraine account for 25% of  global exports. This could potentially be an export boost for Australia if supply is restricted or sanctions placed on  exports from Russia. Furthermore, not included in this graphic is ammonium nitrate, of which Russia is responsible  for around 65% of global production. This is the primary ingredient used in fertilisers. Russia banned the export of  this mineral product recently, with the ban to extend to April 2022. Should sanctions remain in place for an  extended period then the impact of inflation on food prices could be enduring.

During times of heightened geopolitical tension gold and gold stocks tend to be viewed as a relative safe haven.  Gold stocks have been out of favour for some time as risk aversion has been low and sentiment in the gold space  poor. This has certainly been reflected in the valuation of gold stocks with many trading at significant discounts to  their respective valuations as measured by P/NAV. This is highlighted in the graphic below with gold stocks on the  left side of the chart. We highlight Northern Star (ASX:NST) which was recently trading at P/NAV of 0.73x with a  FCF yield of 7% in FY22. Sentiment at the moment appears to be changing as many investors seek safe haven  assets such as gold and gold equities.

Valuation of Gold stocks on the left side of the chart

Asset Class Impacts Since the Russian Move into Ukraine

Both Oil and Gold have rallied in recent weeks, with the spectre of reduced oil supply driving prices higher. Gold has  performed its traditional role in periods of market stress, with investors seeking some protection via the precious  metal.

Have been largely driven by inflation and market expectations of rate hikes over the next 12 months, however US  Bonds saw some buying as investors shifted allocations in a flight to quality given uncertainty inherent in equities  markets during times of elevated uncertainty. 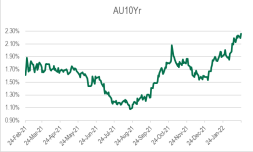 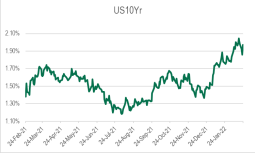 Have been volatile for some time, with high growth stocks particularly suffering over the past 3 months, as the  potential for rate hikes became clearer, however the increased volatility presented by the Russian invasion of  Ukraine has dominated the market narrative since late January. 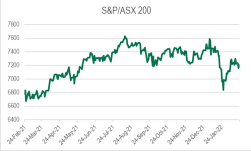 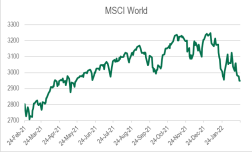 German markets have seen the most volatility among the major European exchanges, whilst Emerging markets  have been languid over the past 12 months compared to their developed market peers. Whilst the read-through  impact of any conflict on Emerging Markets as a whole is likely to be varied, the potential higher inflation (and  consequent higher US Interest rates) is likely to be a headwind, however the relatively higher exposure to the  energy sector (6.8% in EM vs 3.8% in Developed Markets) may mitigate some of the volatility. 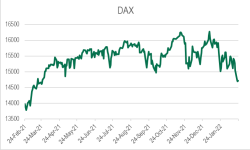 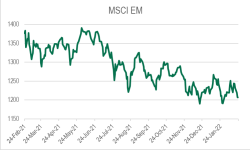 It is worth noting that historically, the market impacts of localised geopolitical events like this have typically been  short-lived. Our diversified model portfolios are built on a Strategic (Long-Term) Asset Allocation foundation that  includes stress testing for geopolitical events such as this.

We will continue to monitor the situation closely as events unfold. Further deterioration in this conflict may  necessitate the need to implement defensive portfolio changes. At this stage we are not making changes and  keeping a watching brief on our Asset Class weightings. There is a fair degree of defensiveness built into current  settings. The situation is obviously deeply concerning and we will monitor closely.

From a very long-term perspective, we note that volatility has historically tended to cluster (both to the upside and  downside) as per the chart below on the left, so if investors react to the large negative movements by selling out of  equities, they run the risk of being out of the market for the large positive days. The consequences of missing just a handful of these “best days” can be substantial, as evidenced by the chart below on the right. So we are mindful of  this before taking action in portfolios and we continue to take a long term view. 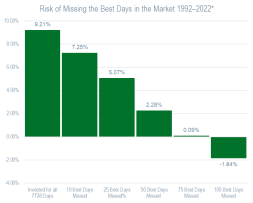 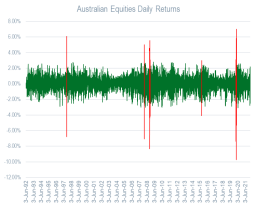 Information in this document reflects our understanding of relevant regulatory requirements and laws etc as at the date of issue, which may be  subject to change. While care has been taken in preparing this document, no liability is accepted by Actuate or any member of the Insignia  Financial Group, nor their agents or employees for any loss arising from any reliance on this document.

If any financial product is referred to in this document, you should consider the relevant PDS or other disclosure material before making an  investment decision in relation to that financial product. Aged Care Advice – Is it time to plan a solution? 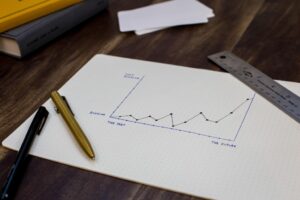 New Year, New Me! What does a financial Plan consist of and where do I begin

The information provided is general advice only. It has been prepared without taking into account any of your individual objectives, financial situation or needs. Before acting on this advice you should consider the appropriateness of the advice, having regard to your own objectives, financial situation and needs. The information contained on this website is intended for Australian Residents only. Updated 3rd March 2022.